Triple Mode Redundancy Server to be exhibited at Hannover Messe 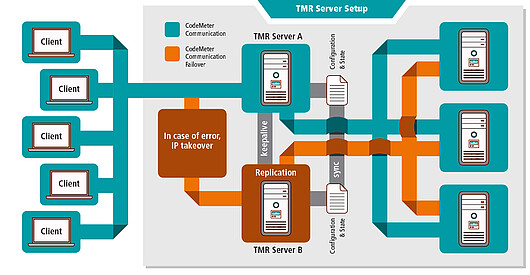 CodeMeter, Wibu-Systems’ flagship technology for protection, licensing, and security, provides software publishers and intelligent device manufacturers with 23 preset software license models. With the High Available License, the user can own a redundant license server; the 2-out-of-3 architectural principle ensures the availability of software in the event of a license server failure, providing uninterrupted license updates.

To the user, the entire TMR system appears as a single entity. Although there is enormous complexity in the architecture to ensure that high availability is coupled with industry-leading protection and security against license fraud, everything has been designed with “business as usual” as a core feature.

This architecture works because every license is created in triplicate and given a special TMR ID as an additional property. The three licenses are placed into three separate license containers (CmContainers) that also have the same identifier; the TMR group can then allocate the software or hardware-based CmContainers with the same ID to a virtual CmContainer. This is ultimately the one and only license container the end users see, so for them, everything works as normal.