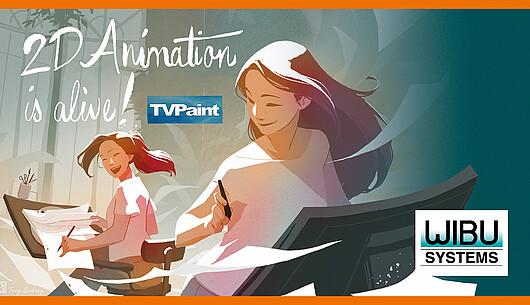 Wibu-Systems, a leader in the global software licensing market, has adapted its awarding-winning CodeMeter technology to protect IP and enable creative licensing for TVPaint Développement, a market leading bitmap animation technology company in Metz, France. TVPaint has been serving the art, animation, and design community since 1991 and is now regarded as one of the industry standards for 2D animation. With its business success and increasing number of customers, TVPaint had outgrown the existing licensing system and turned to Wibu-Systems for a solution to protect and license its IP that was both reliable and easy to implement for all their users.

The company originally relied on different generations of dongles for simple copy protection and software distribution by DVD, but the system eventually became a logistics challenge with physical distribution and dongle assignment taking up more and more of the company’s resources.

“We started working with dongles for copy protection,” says Thierry Cantet, Customer Support Manager at TVPaint Développement. “In the early days, we worked with dongles for the parallel interface and later switched to USB dongles. The basic idea stayed the same but offered little flexibility or scalability. We had to purchase dongles, add the right licenses, and then mail them to the customer. This was often very complicated, because we had several types of dongles. For example, someone who bought our software for fourteen users received five dongles: one for ten users and four for one user.”

As TVPaint’s success grew, so did the burden of the management logistics of the dongles. “We have a very large numbers of users,” says Dean C., Technical Sales Agent at TVPaint Développement, “all of whom had to receive DVDs with the software and dongles with the licenses. The logistics required more work year after year.”

TVPaint searched for a new license management solution and decided upon Wibu-Systems’ CodeMeter software protection, licensing, and security technology. The CodeMeter license management system is used by global software publishers and intelligent device manufacturers to protect their IP and leverage creative licensing strategies to monetize their businesses. Switching over to the CodeMeter licensing system turned out to be the commercially and operationally best choice for TVPaint and a seamless implementation experience. With initial support for the company’s legacy dongle system and assistance with realigning TVPaint’s IT landscape, the technical switchover was finalized in a matter of hours, and CodeMeter’s license distribution and management processes quickly integrated with a rebuilt ERP system using Odoo. TVPaint’s products are now sold and licensed in a cleanly integrated and efficiently automated online process, leaving the company the time to concentrate on what it does best: Creating exceptional animation software.

“There’s a benefit for everyone,” says Dean C. “A customer who purchases our software online can start using it in a matter of minutes. That way, we do not just save the time and effort to ship thousands of dongles, but also realize significant savings on shipping costs, customs, and taxes.”

Using CodeMeter solved yet another legacy issue. “Our software is available in two versions: Standard Edition and Professional Edition,” Dean C. explains. “Customers who purchased both versions used to receive two dongles that could not connect on one server. With CodeMeter, they can now run different versions on the same container.”

Marcel Hartgerink, General Manager of WIBU-SYSTEMS SARL, France, added “The flexibility and versatility we have built into CodeMeter allows customers like TVPaint Développement to scale their systems as their business grows and employ creative licensing strategies to not only satisfy their customers, but also to open new monetization options. Plus, the time savings in logistics and back-office efficiencies gained with integration of CodeMeter into TVPaint’s existing ERP system allows them to focus on their development efforts rather than getting caught up in administrative issues.”