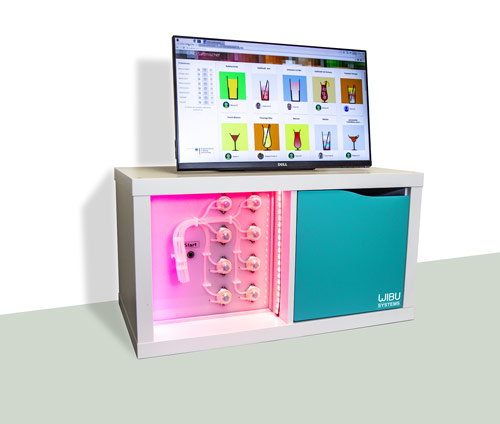 A cocktail mixer powered by CodeMeter combines with a secure e-shop to form a secure and cloud-based technology data marketplace.

The IUNO project (the German national reference project for IT security in Industrie 4.0 financed by the Federal Ministry of Education and Research) officially ends today, after having built a solid bridge between academia and industry for the last three years. The collaborative results are being shared publicly at a free event taking place at ewerk in Berlin on September 27th. The focal point of the lectures and demonstrations that are included in the program is security: security of services for the remote maintenance of production facilities, security of manufacturing processes for customized production, security of data across the entire value chain, and secure networking and monitoring of production systems.

Wibu-Systems is exhibiting three different use cases, each representing a technological milestone in its path towards security by default for software, firmware, and sensitive data in Industrie 4.0. The ultimate goals of its mission go beyond sheer innovation aspects: with each advance, the company is adding monetization capabilities for vendors to compete in a global arena, facilitating the go-to-market experience of inventors, and expanding the freedom of choice for users.

In collaboration with TRUMPF, a leading manufacturer of machine tools, lasers, and electronics for the industrial realm, Wibu-Systems has developed a Secure and Cloud-based Technology Data Marketplace solution. The demonstrator, coming in the form of a drinks mixer combined with an online store of cocktail recipes, is set to deliver a genuinely sensory experience of the future of industry. The user selects the recipe of his choosing, the recipe is sent in encrypted and fully licensed form to the mixer, and the drink is made in front of the user’s eyes. Wibu-Systems’ CodeMeter technology protects the IP – the recipe – and enforces the licensing for each recipe. Access to marketplaces and ownership over data are becoming the gatekeepers for participation in Industrie 4.0 – but neither can function without an adequate level of protection.

In a separate project aimed at enhancing the security capabilities of the ubiquitous RFID technology, Wibu-Systems has teamed up with Balluff, one of world’s leading makers of sensor technology, and HOMAG, a pioneering maker of wood processing equipment. The Balluff OPC UA RFID Reader with Integrated Secure Elements is based on their intelligent UHF reader platform, supercharged with a Wibu-Systems CodeMeter ASIC that embeds an Infineon SLE97 crypto-controller as the secure powerhouse for digital keys and certificates. The system uses the security functions of the OPC UA implementation of Unified Automation built around Open-SSL to secure M2M communication at both ends: the tag reader and the computer processing the data on the one end, and the manufacturing execution system using it to steer production operations at the other end.

Wibu-Systems is also showcasing IP Protection and License Management with Trusted Computing and revealing how its flagship technology CodeMeter can be used to protect applications against reverse engineering and counterfeiting and enable new business models with license and entitlement management. Licenses associated with individual software functions are bound not, as it typically happens, to a USB dongle, a memory card, an ASIC or a file, but rather to an OPTIGATM TPM from Infineon Technologies to keep them safe and available only on the licensed target devices. License lifecycle management can also be integrated into back office workflows to expedite the monetization process even more efficiently.

The vision of a safe world of self-expression that Oliver Winzenried, CEO and founder of Wibu-Systems, had with the birth of Industrie 4.0 is becoming reality: “The scope for the tools we invented to protect, license, and secure digital assets is broadening with every new partnership we create: each vendor that interacts with our technology brings new value and meaning to the initial set of functions we outlined. Together, we give new life to our individual achievements and merge them into a shared experience that celebrates human potential”.