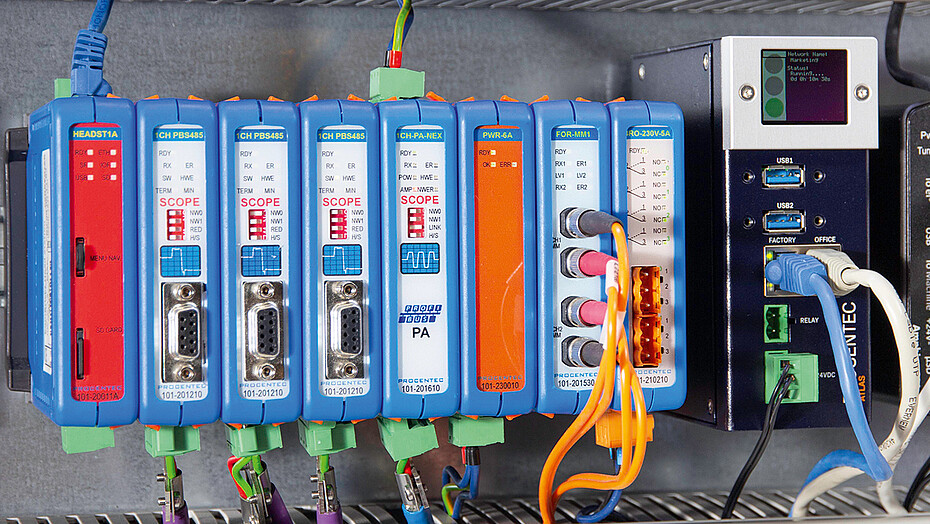 The future of industry relies on smart factories, which in turn rely on massive and intricate communication networks whose data traffic monitors and controls production processes using dedicated communication protocols and highly sophisticated networking hardware and software. To make sure that these networks operate with the necessary integrity, stability, and reliability, the specialists at PROCENTEC have developed the Atlas and Mercury monitoring hardware and intelligent Osiris software for predictive industrial network diagnostics. With the level of sophistication and invaluable IP invested in these products, PROCENTEC had outgrown its original proprietary protection and licensing systems.

PROCENTEC needed help beyond a standard solution and leaned upon Wibu-Systems’ consulting services to tailor CodeMeter technology to their specific requirements. The convenience of CmActLicenses software containers combined with the power of CodeMeter License Central hosted in Wibu-Systems’ datacenter allow PROCENTEC to not only enjoy a new level of IP protection, but also reap the benefits of CodeMeter’s efficient license distribution and management capabilities.

Opting for a customized operating concept built around Wibu-Systems’ flagship technology gives PROCENTEC the peace-of-mind from top-notch IP protection throughout the entire supply chain, without any drawback on the usability of the tamper-resistant solution. Additionally, the versatile built-in licensing options of CodeMeter open the doors to business strategy innovation and the introduction of new sales models highly necessary in the fast evolving world of industrial automation.

Matthew Dulcey
CTO, PROCENTEC
”We don’t like to see the knowledge and experience we put into software development being misused by other parties. Initially, we were looking for a stronger method that would protect our software from intrusion and unauthorized use. By performing some basic tests, we found out that CodeMeter from Wibu-Systems offers more than just the minimal protection of the source code, which we used to apply earlier on. In addition, we are thinking of introducing a license management system that would allow clients to only be invoiced for used packages from a bundle of purchased licenses – this is something Wibu can offer that our original license system could not.”

PROCENTEC, a member of the HMS Group, is a Dutch company with an international orientation that supplies innovative solutions to the industrial automation market. Already a household name in its sectors thanks to its popular PROFIBUS, PROFINET, Industrial Ethernet and Ethernet/IP network stability products, PROCENTEC has become the primary manufacturer of network components with integrated remote monitoring and remote asset-management capabilities. Their Academy and Competence Centre have also established themselves as leading training and consultancy hubs for PROFIBUS and PROFINET projects worldwide.

Behind the awe-inspiring visions of Industry 4.0 stands a reality of enormous and massively complex data networks, based on several different protocols like PROFINET, Ethernet/IP, EtherCAT and MODBUS TCP, often haphazardly imposed on or slowly evolved in an existing and heterogeneous industrial ecosystem. In a context where any downtime means immediate financial losses, monitoring the health, reliability, and security of such a complex environment is an uphill challenge for factories’ owners and operators.

This is the primary task of hardware-cast software packages with full monitoring and troubleshooting functionality, like PROCENTEC’s Atlas and Mercury respectively. The diagnostic devices provide predictive capabilities and dynamic interactive topology aimed at bringing unique insights about the health of the industrial network to the user’s fingertips, and a robust tablet for monitoring and troubleshooting older and newer industrial networks operating side by side on the go. Built to work alongside the two above mentioned hardware-based core pillars and now also available as a standalone solution, PROCENTEC’s Osiris software is a self-learning diagnostic platform that interprets data automatically.

To prevent IP theft and unauthorized use, PROCENTEC had long relied on proprietary protection mechanisms. The decision to go beyond its previous product design paradigm added a new openness to PROCENTEC’s business model and motivated the company to turn to Wibu-Systems’ for its superior software protection, licensing, and security technology.

Working in tandem with Wibu Consulting Services, a custom solution was built around a core of soft-license containers, namely CmActLicenses, and the Datacenter Edition of CodeMeter License Central, hosted in the safe and& reliable environment of a shared server in Wibu-Systems’ dedicated data center. With up to 1500 license activations and deactivations included each month, the Datacenter edition offers PROCENTEC the perfect balance between functionality and economy: The vital standard of 99.5 percent availability is guaranteed and other important services, such as monitoring for critical incidents and reliable patches and updates, are included.

With the implementation of CmActLicenses, a so-called virtual machine is created and sent to the software buyer. This user-friendly and secure process has a number of variants:

Additionally, demo and trial licenses as well as rental licenses can be created as time-limited licenses. CodeMeter relies on an innovative method that protects licenses against time tampering on the computer.

To make it impossible for malicious parties to extend the lifespan of licenses, CodeMeter is provided with an internal virtual clock that runs independently of the computer’s clock. The two are synchronized for each CmActLicense with CodeMeter checking the time validity of the license against the internal clock. The resulting licensing system brings a new class of protection to PROCENTEC’s IP. The ease-of-use and natural flexibility of CmActLicenses make it a comfortable and minimal-footprint solution for PROCENTEC’s clients, as all the necessary heavy lifting in license management can happen in the background. With CodeMeter’s built-in licensing options allowing a plethora of conventional and innovative models, PROCENTEC now also has the ability to introduce new choices for its clients. Trial, demo, and rental plans are now an option: Just the right freedom of choice needed in as diverse and heterogeneous a sector as modern automated industry.