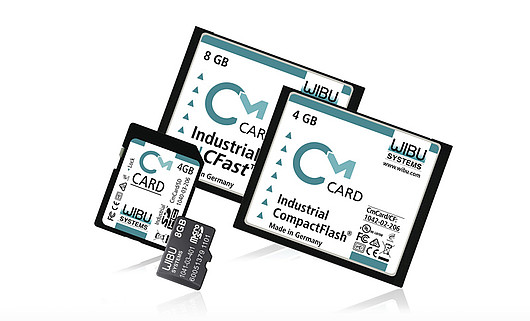 Wibu-Systems’ CmCards are the shortcut to secure Industrie 4.0 architectures in the brownfield

Wibu-Systems, the global protection, licensing, and security powerhouse, provides its CodeMeter technology for the integrity of data, applications, and communication in association with hardware and software secure elements, including a complete range of secure memory cards, the CmCards. In a connected world, illegal counterfeiting, reengineering, or illicit copying as well as sabotage, manipulation, or espionage threaten the invaluable know-how of companies everywhere. CmCards are the ideal medium to introduce secure Industrie 4.0 concepts in brownfield scenarios.

CmCards, which are available in microSD, SD, Compact Flash, and CFast form factors, are specifically designed for industrial applications. All models deliver full CodeMeter functionality through the Infineon SLM97 smart card chip, on which encryption keys and sensitive license data are stored. CmCards are qualified for extremely high EMC performance. The conformal coating used on their PCB ensures smooth operation even in the presence of condensation and with temperature fluctuations from 40°C to +85°C. The flash controllers made by hyperstone (S8 for CmCard/microSD and CmCard/SD, F4 for CmCard/CF, and A2 for CmCard/CFast) and their associated and patented hyMap® firmware guarantee memory reliability against loss of data during writing operations even in case of power failures.

Oliver Winzenried, CEO and founder of Wibu-Systems, adds: “Next week, at Embedded World, hall 4 booth 540, we will be showing a portable security concept for the immediate application of Industrie 4.0 principles: CmCards offer direct access to the most cutting edge encryption methods, can be transferred from device to device for software license mobility to propel the growth of a license-based economy, and can be used in computers, embedded systems, and PLCs. Manufacturers and service technicians can add value to their existing facilities and enjoy a prompt return on their investment by applying modern business models made possible by versatile license lifecycle management.”