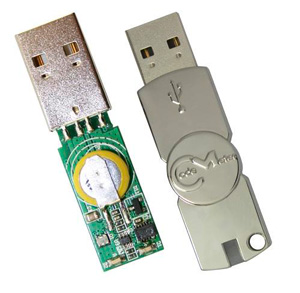 Karlsruhe – Frequently, software vendors require a secure time, for example, when specific computations or subscription calculations are at hand. For such cases, the hardware variants of CodeMeter software protection already have been equipped with an internal clock in the SmartCard chip. At this year's CeBIT and Embedded World, Wibu-Systems presents the extended CodeMeter hardware CmStick/T; it combines the advantages of the existing mechanism based on time certificates and a battery-backed clock.

Fair visitors are able to have a first look at the concept and the CmStick/T at the Wibu-Systems booth at CeBIT in Hall 11 B 25 and at the Embedded World in Hall 11 at the joint Microsoft booth 318. The CmStick/T especially suits companies offering their solutions in the form of time-based licensing models, or when solutions are only sporadically used and are not integrated in networks.

The existing CodeMeter time concept features an internal clock running while the PC is powered. It synchronizes forward with the PC clock and by using time certificates provides a manipulation-safe clock setting. However, in some cases, an independent and permanently running clock is required as, for example, when the protected software is rarely used or the period of use is short. The new CmStick/T with its battery-backed clock bridges the time period until the user PC is powered on the next time. Then the battery-backed clock of the CmStick/T is used to forward synchronize the time in the CmStick/T. The concept of the secure clock remains effective also in the case the battery exhausts after some years: then the CmStick/T acts as a CodeMeter hardware without battery-backed clock.

Oliver Winzenried, CEO and founder of Wibu-Systems, explains: "With the CmStick/T we succeeded in combining the advantages of our unique existing concept with a battery-backed clock. Thus we achieve highest ease of use, top security, and long operation life; even in the case the battery is empty, the clock works secure. Manipulating the clock chip by hardware specialists is without effect since the time in the SmartCard Chip is never set back."