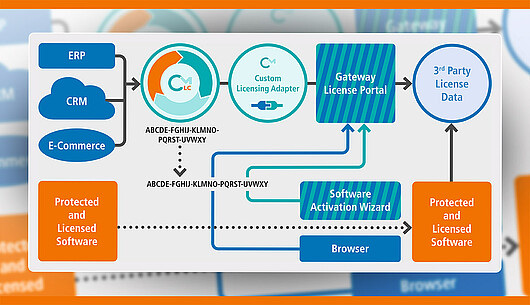 Wibu-Systems, the maker of one of the world’s leading IT protection, licensing, and security technologies, is advancing the licensing capabilities of all legacy software publishers. With three decades of its own history in the business, the Karlsruhe-based company knows the value of continuity and compatibility. This understanding has led to the creation of CodeMeter Custom Licensing Adapter, a dedicated extension to the popular CodeMeter License Central suite that slots right in between older software with an established licensing system and modern, full-featured licensing concepts.

Software developers everywhere have come to be loyal fans of CodeMeter for the versatility that Wibu-Systems’ technology offers them with its choice of hardware, software, and cloud license containers, its ready integration with leading back-office systems, and its broad range of license configurations and operating concepts to suit any business model. However, few software vendors are starting from scratch. Many, if not most, already have proprietary or other third-party licensing systems of varying reliability in place, sometimes the product of a long evolution alongside their software. While Wibu-Systems’ CodeMeter is already designed to make the transition to its modern and more powerful system as smooth and efficient as possible, the move would often require a full-scale switchover to a new version of their software – in some cases a technical impossibility and in even more instances a commercial or procedural hurdle, as existing customers would have to accept this sudden departure from existing and often long-cherished software versions.

The usual route out of this conundrum for software publishers is to run different, patched versions of their products in parallel for the transition period, which again entails considerable technical and commercial challenges, as even the tiniest differences between versions can become serious fault lines with the potential to upset data compatibility and, by implication, business continuity for loyal, long-time users.

This simple, but clever solution means that no changes need to be made to the software out in the field, while the new, levelled-up system can handle all the operations that CodeMeter License Central is known for. This naturally includes its integration with ERP or other back-office systems, allowing license management transactions like license creation, distribution, and monitoring to be automated even with the old licenses. At the same time, software developers can use CodeMeter to license all new software or even introduce completely new license-based business models, like subscription services, without having to leave loyal existing customers behind.

Ruediger Kuegler, VP Sales and Security Expert at Wibu-Systems, sees CLA as fulfilling the promise of Wibu-Systems − cutting-edge licensing technology with real compatibility: “We have made it a point that users should not have to pay a price for wanting to work with the systems they have come to love. All users of CodeMeter deserve the same excellent performance, whichever system or software they prefer. And with CLA, they can do just that – without even being aware that something is different in the background.”