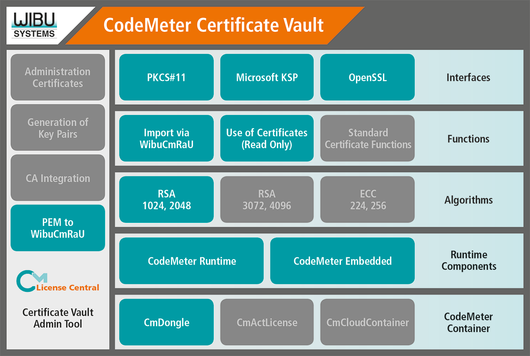 February 21, 2019 - Edmonds, WA - Wibu-Systems will introduce a revolutionary way to use certificates with CodeMeter Certificate Vault, an innovative certificate management tool, at Embedded World 2019 in Nuremberg. The PKCS#11 compliant token provider is designed to work optimally with Microsoft’s Cryptographic API Next Generation (CNG) or OpenSSL API to make it easier for users to administer the security of identities, digital signatures, emails, or VPNs with strong authentication mechanisms.

There is one hard and fast rule in certificate management: To get a certificate, a user first creates a pair of a public and a private key. The private key that is used to create the certificate request must never leave its secure home. The request would be checked by a Certification Authority, which produces and signs the new certificate for the user to load back into his or her certificate storage.